The people of Abiriba are a community of enterprising generation who were originally of the Agunaguna sub-tribe of the main Ekoi group that were a part of the larger Yakurr group that can be traced to Ikom and other parts of the upper Cross River basin before migrating to the current location in Abia State, Nigeria.

Abiriba is a unique kingdom with a rich culture and history. It is one of the oldest monarchies in the south-eastern part of Nigeria, Africa. The kingdom of Abiriba is made up of three communities namely Ameke, Amaogudu and Agborji. It operates on a tripodal system where the Eze of each of the three communities come together to form the Enachioken-in-council with the Eze Ameke as Enachioken on the basis of first among equals. Succession to the throne of Eze Abiriba, Eze Agborji and Eze Amaogudu are hereditary – ACIUCentral.org. Abiriba has a well-developed and active Age-Grade system that has been significant to its development.

The Abiriba people are industrious and known for pre-historical black smiting and sculpture artifacts but the people have transitioned to trading and industrialization. Since the people were predominantly merchants, they are widely travelled within and outside Nigeria, and are correspondingly cosmopolitan. The exposure and prosperity of Abiriba people has induced the transformation of the community from a normal village setting to a model sub-urban but residential setting with some of the most exotic homes in the Igbo land, which earned Abiriba the nick name “Small London”.

Genealogy of Enachioken of Abiriba Kingdom 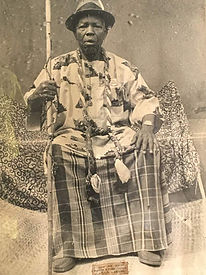 The Abiriba Communal Improvement Union (ACIU) was formed out of the desire to organize and lead Abiriba people into socio-political and economic civilization through education.

The Inyimoka and Union Chambers of Commerce which had earlier been formed was concerned with only mercantile issues, hence there was a vacuum in the arrears of education and socio-political development and advancement.

In 1935 there was a violent dash between some Abiriba boys and Owerri boys in Umuahia, this made some of our prominent personalities to suffer humiliation and injustice. Therefore, there arose the need to have a united front for the purpose of defending our Fundamental Human Rights, improve our intellectual/ educational capacity and extend our socio-political frontiers.

The Union had its General Conference in May 29th 1941 at IFIAYONG during which Chief Lazarus Ebe Ifendu was unanimously nominated as the General President, but he modestly declined the offer but by a consensus persuasion he accepted to serve as General Vice President.

The Constitution of the Union was ratified at the Annual General Conference held at Abiriba quarters –Umuahia in 1942 with the Motto: “SELF HELP IS THE SURE PATH TO PROGRESS”.

The ACIU has produced many eminent Presidents namely:

The Central Executive Board held a free and fair election on the 26th December 2017, in accordance with Article 14.1 (viii) of our Constitution.

This is the Highest Organ of the ACIU and comprises of:

The Trustees are the General President who presides over the Governing Council.
The General Secretary who is also the Secretary.
Five other nominees who presently are:

The Patrons acts as Advisory Body and is presently made up of:

Inynimoka and Umon Chambers of Commerce

Inynimoka and Umon Chambers of Commerce

From time immemorial, Abiriba, has remained a community of farmers and traders. The trading activities emanated from Blacksmith industry in which Abiriba was famous. Most of the traders reside outside Abiriba. The need to be organized under leaders became inescapable, hence the formation of UMON GUILD OF TRADERS (UMON CHAMBERS OF COMMERCE) FOR Abiriba people in the Riverine Areas and INYNIMOKA GUILD OF TRADERS (INYNIMOKA CHAMBER OF COMMERCE) for Abiriba traders in the Upland or Railway Line Areas. These chambers of commerce handle cases of disputes arising from business transactions.

Inynimoka is made up of two divisions and six houses:

Umon is made up two divisions and eight houses:

Areas where Inynimoka and Umon are found: 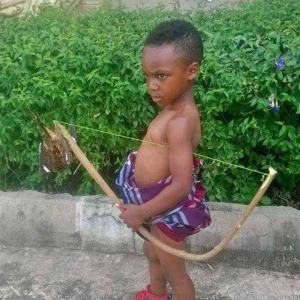 Igba nnunu is an age long tradition of the Abiriba people whereby a boy between the age of five and seven years parades a live bird hooked to a bow which he captured around the nooks and crannies of the community where his relatives live. The live bird hooked to a bow symbolizes the enemies he is expected to capture and bring home alive when he gets of age or the skulls of the enemies he will be bringing home in the course of his hunting exercise or while exercising security functions for the community at an older age. It is seen as the first heroic achievement of an Abiriba male child and it is exclusive to only the male children.

Its origin emanates from the fact that in the olden days, Abiriba was surrounded by very hostile communities and in order to protect its territories, the community began to train their male children on the art of marksmanship at a very early stage in life. For security purposes therefore, a male child was taught the use of bows and arrows and how to aim at objects and to shoot birds. This practice trains the male children for bravery, courage and the aggression for them to fulfil the family and community civic responsibilities as their grow older.

In those days, during these training exercises, boys are placed under the watchful eyes of older boys who will follow them around and act as their guide. These older boys known as “master”, will take the boys out early in the mornings to show them how to hunt down birds with their bows and arrows and the day a boy succeeds in shooting down a bird, he will be adorned with a copper rod coiled around his waist and with the bird foisted at the end of the bow, he will be led by his master and peers round the community to show off his prowess.

While moving around the community where his relatives live, adults will be beckoning on him to tell them how he achieved this feat and he will demonstrate to them, after which the adults may put a little quantity of sand on his head and may also present him with money or tuber of yam or maize, as the person is disposed to do. The adult may also dismiss the boy by calling him “eti”, which signifies a great male child of valour or child hero, while thanking him for the feat. Every gift that is handed to the boy will be collected and kept for him by the older master.

At the end of the exercise of the presentation of the bird to the public, the elders of the family will gather at the compound square where the bird will be roasted and eaten by the boy and his peers but the head will be given solely to the boy to eat.

The gifts collected by the boy is shared into three parts and given to:

This childhood rite symbolizes the transition of the boy from infancy to childhood and the memory of this ceremony is usually not lost in a long time. By Abiriba tradition, anybody who does not successfully pass through this stage of life cannot perform the Uche ceremony, unless the person makes certain reparations.

In today’s practice of the Igba nnunu, male children who are a lot older but who could not perform this ceremony when they were younger can still do it and in most practices today, the male children do not always go into the bush to hunt for the birds but their parents arrange professional hunters to get the birds while the children carry them around as if they shot them down themselves. It must also be said that in today’s practice, the boys are not expected to move around naked, as was the case in the olden days.

Ikuru Igwa Mang
The Age grade system by Abiriba Tradition is an effective instrument of our local administration. The most senior of our (13) thirteen active and recognized Age Grade which is known as the premier Age Grade (Ukeji Agbala) in our Local Parlance is the Traditional watch dog of Abiriba Kingdom. (Ukeji Agbala also head “Inyimoka/Umon” outside Abiriba and anywhere you find Abiriba people. The Ukeji Agbala provides a definite line of responsibility through which Enachioken-in-Council communicate with people and also gets feed backs. Ukeji Agbala operates with active support of Uke Igwa Mang and Umunzu their junior ward which act as the law enforcement agent of the community.
Source: A.C.I.U. Port Harcourt

The Akanu Age Grade Divisional Library, Abiriba, was commissioned by the then Military Administrator of Imo State, Colonel Sunday Ajibade Adenihun in 1979. The library, like a lot of things in the country, have suffered from obsolescence and poor maintenance. And although it is still functioning, with a maximum of 5 or 6 visitors a day.
Source: A.C.I.U. Port Harcourt

Enuda High School is a public combined junior and senior secondary school located in Amaeke Ward1, Abiriba in Ohafia Local Government Area, Abia State, Nigeria. In a survey done on 16-Apr-2014, the school had 278 male students making a total of 278 learners served by 15 teachers, the school had 18 classrooms with electricity, 2 toilets with an improved water supply and sanitation system.
Source: A.C.I.U. Port Harcourt

There are no upcoming events at this time.

We're not around right now. But you can send us an email and we'll get back to you, asap.